Creating a Location-Based Augmented Reality Game as a Tourist Attraction

In order to determine if an augmented reality experience in an historic business district can bring in day-trippers, and encourage regulars to discover new shops and locations in the area, we plan to create a location-based augmented reality game for a small town in Ontario with a small tourism economy. Augmented reality games for tourists have been implemented before, particularly in European cities with large existing tourism industries. We are proposing to create a game in a small tourism market, not to entice international tourists, but rather to draw day-trippers from the surrounding urban areas, as well as create opportunities for locals to spend more time in the downtown business area.

NOTE: This is a microblog, plan and summary of the activities taken to create a location-based augmented reality mobile game for a town with moderate tourism potential. We aim to create a story-based game using local landmarks to attract locals to the downtown business area, and to bring day-trippers from the nearby mega-city. This is a work in progress, with the game expected to be complete in the summer of 2021.

Augmented reality (AR) is a computer-generated combination of real-life and computer generated data, where virtual objects are collated or overlay the real world. (Cassella, 2009). AR is not a new technology. In fact, some have pointed to a 1901 story for boys by Oz creator L. Frank Baum as the first imagining of some of the capabilities of AR (Johnson, 2013).

While the technology that makes AR possible was beginning to appear in the 1980s, it was not until the last decade that mobile devices became powerful and inexpensive enough, and ubiquitous enough, to make it viable to create commercial applications utilizing the technology. The current generation of smartphones have all the elements necessary to utilize the devices for AR appications: a camera, GPS, and a reasonably fast internet connection. The only question still in play is how to use this technology to create applications that users will want to download and utilize in a manner that drives benefit to the creators. 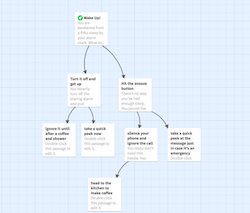 The success of the game requires a compelling story line that is related to the history of the town the app is promoting. With the assistance of a county archivist, we have highlighted a number of town buildings, statues and historical characters that can be used inside the game.

In order to focus on the story and the potential branches and interactivity, we will be creating a text-only prototype game in Twine, a free interactive fiction editor. This will allow some testing and QA in order to ensure that all the branches come to satisfactory endings, that the puzzles are solveable, and hints are available at critical points in the game

We will be using Unity to develop our application. Due to time constraints, we do not wish to develop separately for iOS and Android. We therefore need to find tools for maps and AR that will enable us to build for both platforms from the same code.

Location-based gaming requires access to GPS and maps, and for that we'll be using Mapbox, primarily because of the fantastic Unity support, solid documentation and free online course. The licensing of Mapbox fits well with our plans. Since our app will be play-once, and our market is relatively small, we expect to fit nicely within Mapbox's free licensing model.

As this is a non-commercial project, cost is a significant issue for us, and although there are many wonderful AR kits, the limitations based on the free or educational use licenses could sabotage the project. Therefore, we'll be evaluating SDKs with the following needs in mind:

With a story and SDK in hand, we next need to create the assets for the game. As this is AR, we'll need to acquire GPS coordinates for the mapping, and create images with markers for the real world objects we wish to detect, as well as the augmented reality overlay.

Games such as Pokemon GO & Zombies, Run! are brought to life by using real time location integration. Adding real-time locations and mapping into your games with Unity 3D makes your game into a location-based experience In this free Mapbox Unity tutorial, you will learn how to add location data into any game using a creative mix of Mapbox tools including; Mapbox mapping, Mapbox navigation, and location search SDKs.

SuperSight: What Augmented Reality Means for Our Lives, Our Work, and the Way We Imagine the Future
ISBN: 1950665801

The Infinite Retina: Spatial Computing, Augmented Reality, and how a collision of new technologies are bringing about the next tech revolution
ISBN: 1838824049

Research Handbook on the Law of Virtual and Augmented Reality
ISBN: 1800370970